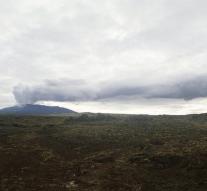 - According to experts Icelandic volcano Hekla can erupt any moment. With all the consequences for international air travel and local tourism entails.

A geophysics professor named Páll Einarsson is sounding the alarm. He warns tourists not to travel to the tourist attraction. The area around the Hekla volcano in southern Iceland, is popular among tourists for its pristine nature.

In 2000 the largest known volcano in Iceland erupted for the last time and according to measurements the pressure is already twice as high as ever. On average, the volcano eruption ten years.


An eruption, probably according to the scientist would be a lot more severe than in 2000. 'Hekla is a dangerous volcano,' Einarsson says to the news visir. is. 'In addition, fly every day between 20 and 30 passenger aircraft over the top of the Hekla'.

The eruption of the Eyjafjallajökull, another famous volcano in Iceland lies with many Europeans still fresh in his memory in 2010. When air traffic was disrupted for weeks because the volcano a giant plume blew volcanic ash in the atmosphere.