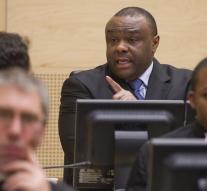 - The wealthy former Congolese vice president Jean-Pierre Bemba Tuesday will hear the verdict in the case which the International Criminal Court (ICC) had brought against him.

Bemba was found guilty earlier this year to crimes against humanity, because his troops killing and raping marched through the Central African Republic.

It is the first time that the ICC focuses on rape as a weapon of war and the first time anyone has been convicted because others under his command were committing crimes.


Bemba sent between October 2002 and March 2003 about a thousand fighters to the neighboring country to help crush a coup attempt. According to his lawyers, they were not under the direct command of Bemba in that period, but below that of CAR president Ange-Felix Patasse. The ICC judges ruled that he did have control over his men, and therefore criminally responsible.

Bemba laid down their arms in 2003 and was vice president under President Joseph Kabila, whom he lost three years later in presidential elections. Bemba fled to Belgium, where he was arrested in 2008 and was transferred to the ICC.

During the proceedings were horrific testimonies by, among other things about a man, his wife, his daughter and granddaughter were all victims of a gang rape by militiamen.


The Criminal Court has been criticized in the case concerning the slowness of procedures. The case against Bemba is only the third since the establishment of the court in which judgment is spoken and the facts in the case is going to be now fourteen years old.