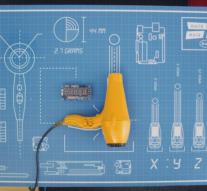 - Computer giant IBM has a well-intentioned campaign tried to make women more interested to get into the tech sector. Unfortunately hit the 'hack-your- haardroger' campaign completely misses the mark, which the company a lot of criticism came to be.

In the accompanying video, women are summoned to even come up with creative ways to use their hairdryers, rather than only for drying hair.

Although IBM has good intentions - to raise the interest in IT careers among women - specific approach was not well received. Especially the fact that women are directly associated with hairdryers, fell into the wrong kind, according to comments on Twitter.

That's ok @IBM, I'd rather build satellites instead, but good luck with that whole #HackAHairDryer thing. https://t.co/n3vp0grbEP


A handy visualisation of the effects of poor #socmed planning. #HackAHairDryer pic.twitter.com/LskG4NRXOO


IBM is just too embarrassed to admit that it doesn't understand how to work a hairdryer. #HackAHairDryer


I leave hairdryer fixing to the men, I'm too busy making nanotech and treating cancer. https://t.co/fX7tDPsJXr