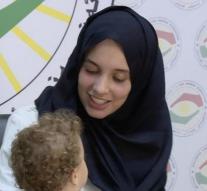 mosul - The husband of Laura H., who said last year, fled from IS area, was arrested in Mosul. His arrest was filmed.

Ibrahim I., the husband of H., was arrested by Iraqi troops in Mosul. The 28-year-old Dutch Palestinian left to Syria at the end of 2015 to join his wife and two children at IS.

His detention was filmed by an Iraqi journalist on Wednesday, and the family of Ibrahim recognizes him of the relevant video, message Trouw. The journalist was able to talk to him briefly and confirm his identity.

According to the Iraqi journalist, I. was arrested after a fight between Shiite warriors and IS, where I fought together with two Russian snipers. There was uncertainty about the man's fate. He would be shot down last year by IS and seriously injured.

Laura H. was in court in the Netherlands yesterday. The jihad bride says to be fled from IS area, but her story is not believed by Justice.