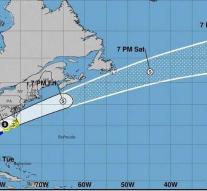 miami - Hurricane Michael approaching the east coast of the United States can become a storm of the fourth category when he lands in western Florida or in the Big Bend area of ​​Florida around the city of Tallahassee.

According to governor Rick Scott, Michael is expected to be the most lethal devastating storm in the area in this area in decades. The last major hurricane that hit western Florida was hurricane Dennis in 2005. Scott declared a state of emergency for 35 regions in Florida.

The National Hurricane Center NHC warns of wind speeds of 195 kilometers per hour. Currently, Michael is a storm of the third category, the third heaviest category. A hurricane warning has been issued for a large area of ​​Florida, Alabama and Georgia, which may be affected by heavy rainfall.