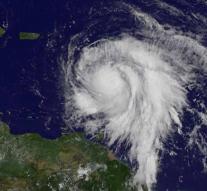 miami - Hurricane Maria has become even stronger, according to the National Hurricane Center in the United States, Maria is now in fifth category. That is the heaviest class with wind speeds of 260 kilometers per hour.

The hurricane draws to the west north west at a speed of approximately 17 kilometers per hour, according to the NHC, which warned of heavy rainfall and storms in some areas. Maria will rage near Saba and Saint Eustatius in the course of the morning (Dutch time).

A hurricane in fifth category is catastrophic. Several precautions have been taken in several islands in the area. Thus, the authorities opened at Puerto Rico shelters and cranes were demolished. The Dutch authorities sent teams with marines to the islands of Saint Eustatius and Saba.

The biggest problems are expected in islands like Martinique, Guadeloupe and St. Kitts.