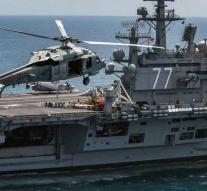 norfolk - Hurricane Florence is not only accompanied by the evacuation of hundreds of thousands of Americans, NATO is also bothered by it. The transfer of the command from the alliance headquarters to a French air force general in Norfolk in the US state of Virginia has been moved and brought forward due to the expected heavy gusts of wind.

The ceremony would take place on board the aircraft carrier USS George H. W. Bush on Thursday (local time), but that has been canceled. The transfer is now held Wednesday at the headquarters at the Norfolk naval base, where staff from 26 NATO countries work.