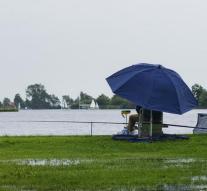 copenhagen - Fishermen are called massively going after 80,000 escaped rainbow trout on the coast of Denmark. The fish escaped by accident from a fish farm in a fjord in Jutland and it is feared that they will affect the ecological balance in the area. That British media reported Wednesday.

According to the Danish organization for fishery is the time of the escape extremely unfortunate because other types of trout right now lay their eggs applicable at the rainbow trout as a delicacy.

The fish could escape after a cargo ship had been sailing from the fish farm in Horsens Fjord.