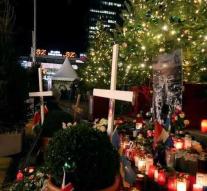 karlsruhe - The German police are hunting a man who would have assisted the perpetrator of the attack on the Christmas market in Berlin, Anis Amri. According to German media, it is Meher D., a 32-year-old Tunisian, who has been identified by the police. Thursday, an arrest warrant was issued against him.

Meher D. would end up in Libya, where he joined the Islamic State terror organization in 2015. He is wanted because of membership of a terrorist organization and involvement in murder.

Amri drove on December 19, 2016 with a stolen truck the crowded Christmas market on which 12 people died. The terrorist was shot dead by the Italian police a few days later at Milan.