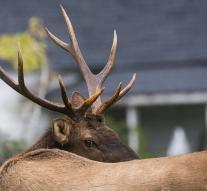 - Heinz Strothmann director of the Norwegian Polar Park, the northernmost zoo in Europe , is deeply saddened . Hunters have shot dead two of his moose.

That happened by accident. Hunting dogs had tracked the moose, but the hunters did not realize that the animals were in Polar Park. Immediately after they had slain the elk, the hunters realized they had made ​​a big mistake.

' Deplorable error ' " This is not okay ", Strathmann responds to The Local. " We had five elk and now we have only three . " The president of the local wild Tribunal does not believe that the killers must be punished : " It is an unfortunate mistake , but everyone understands that it was not intentional. "

The police have begun an investigation but can not yet say whether the hunters are actually prosecuted. Strathmann still wants compensation for the killed moose. He is already looking for a replacement of the two animals killed .