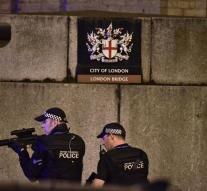 london - The London police are hunting for three suspects, possibly armed, after the incident on London Bridge, reports the BBC.

A van was off the carriageway on Saturday night and drove at high speed on pedestrians on the bridge. An eyewitness said to a radio station that jumped three men out of the vehicle and knocked them on random passersby.

The police reported an incident on the nearby Borough Market after the incident on the bridge. There, two men would have attacked guests in a restaurant with knives, CNN reported. According to a witness, a waitress was stabbed in her throat and a man in his back.

The police said that armed agents responded and that it was shot. She warned citizens to be careful, run away, hide themselves and call the emergency number whenever possible.

Pictures from Sky News show that people in a bar in Borough Market are lying down when the police enter. It is unclear whether it is about the same restaurant where the stinging party took place.