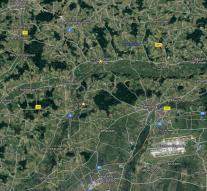 munich - A masked man with a gun has robbed two banks in Munich on Friday afternoon. Employees of both banks are threatened with the weapon. The police opened a raid on the robber.

Just after noon the man appeared in the first bank in Kirchdorf and demanded money. That attempt would have failed, though it is unclear why. The man then drove in a car to the second bank, in Kranzberg. There he made a few thousand euros spoil.

The police are looking for a calving man aged 30 to 35 with man and power with an athletic figure.