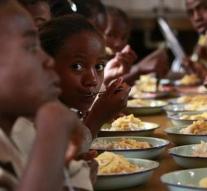 - Nearly 850,000 people in the southern part of the island nation of Madagascar are starving because of the drought that prevails there. The United Nations speak of an alarming situation that threatens to become a catastrophe.

The UN World Food hit Thursday alarm because a large proportion of the people have nothing to eat more than wild. Many people sell parts of their land or other possessions to buy food from the proceeds. The next harvest in the country can be downloaded until next March.

About 90 percent of the population of the whole of Madagascar (23 million people) live from converted 1.80 euro per day. Half of the children are chronically malnourished and consequently suffers from growth problems. The children's UN UNICEF calls for more help.