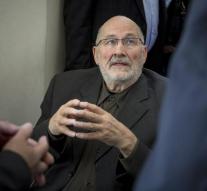 budapest - The court in Budapest opened a procedure on Wednesday to seek out Horst Mahler. The infamous neonazi was detained in Hungary on Monday, where the 81-year-old German wanted to apply for asylum.

The judge found some contradictions in the European arrest warrant, which the Munich Public Prosecutor had drafted. Justice is given forty days to correct the mistakes.

Mahler put a ten-year prison sentence in Germany for anti-Semitic pronouncements and denial of the Holocaust. A judge decided two years ago to temporarily leave the prison because of illness. At the end of last year, Mahler appeared to be recovered and had to sit out for the rest of his sentence, but the German refused. He fled to Hungary.

The elderly extremist was co-founder of the left-extremist Rote Armee Fraktion (RAF). Later he left the terrorist group and joined extremist groups in the right.