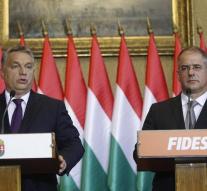 budapest - The Hungarian parliament on November 8 may take a decision on the constitutional amendment mandatory inclusion of migrants impossible under EU rules. The amendment can then mid-November to take effect. That's Lajos Kósa, said the leader of the ruling party Fidesz, Tuesday. He added that Hungary wants to be a committed member of the European Union.

Prime Minister Viktor Orbán also spoke at a press conference about this. 'We must make it clear that Brussels without the consent of the Hungarian Parliament can not accommodate migrants in Hungary and we stop forced housing of migrants. '

Hungarians voted Sunday in a referendum against massive refugee quotas imposed by the EU. However, the turnout was too low to make the referendum binding.