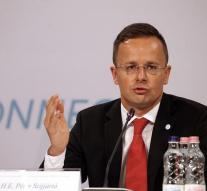 brussels - Hungary does not comply with the ruling of the EU Court of Justice that it is obliged to take asylum seekers from Greece and Italy. Foreign Minister Péter Szijjártó said at a press conference that the judgment of the court is 'unacceptable'. 'This decision puts the safety and future of all of Europe at risk.' He said that there was a 'political decision.'

Slovakia 'accepts' the judgment of the European Court of Justice. But, according to a government spokesman, 'the distribution of refugees by quota does not work in practice'.

The court was Wednesday's objections by Hungary and Slovakia against the EU agreement in 2015 to divide 120,000 migrants from Greece and Italy across the Member States for two years. The two countries had gone to the highest EU judge. They had voted against the quota system at a special ministerial council in Brussels, like the Czech Republic and Romania, but it was adopted by a majority.