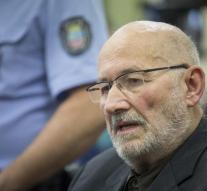 boedapest/berlijn - The infamous Neonazi Horst Mahler was deprived of Hungary, after he had previously asked for asylum. The Hungarian authorities put the elderly German on a plane to his homeland on Tuesday. The 81-year-old Mahler arrived in Berlin in the afternoon, reported the newspaper Potsdamer Neueste Nachrichten.

According to the newspaper, Mahler, an extremist, was brought directly to the prison prison in Brandenburg an der Havel. The German has to impose another imprisonment. Mahler put a ten-year celestial sentence in Germany for anti-Semitic pronouncements and denial of the Holocaust. Due to illness, he was allowed to leave the prison two years ago temporarily. However, Mahler did not return and flew to Hungary.

The neonazi was co-founder of the left-extremist Rote Armee Fraktion (RAF). Later he left the terrorist group and joined the right-wing extremist groups.