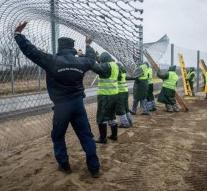 budapest - Hungary completed the construction of a second fence on the border with Serbia. 'It's 155 kilometers long and three meters high,' said Prime Minister Victor Orbán on public radio on Friday.

Orbán also called on the European Union to be less critical of Turkey because cooperation with that country is urgently needed to curb the influx of migrants. 'Turkey is a member of NATO and thus our ally,' said the Prime Minister. 'We must treat the Turkish people and their President with the respect they are entitled to. '

Hungary already built a border gate to keep migrants out of doors. The barbed barrier barrier is at the border with Serbia and Croatia.