Home / World / Hungary does not open corridor for migrants 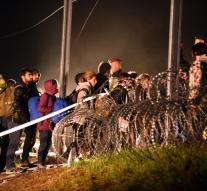 budapest - Hungary has no intentions to open a corridor for migrants. That left the government Wednesday.

" Hungary has made it abundantly clear that no corridors will open in the south to allow migrants to Schengen zone ", said a government spokesman. He made his remarks after a meeting in Vienna of senior police officers from Croatia, Slovenia, Austria and Hungary on the refugee crisis.