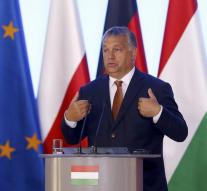 budapest - Hungarian Prime Minister Viktor Orban believes that the EU should start by setting up a European army. Orban, a staunch critic of European migration policy, considers that safety should be a priority for Europe.

,, We have to consider the issue of security as a priority and we must begin with the creation of a European army, 'said Orban. He spoke Friday at a news conference after a meeting between Central European countries and German Chancellor Angela Merkel in Warsaw.