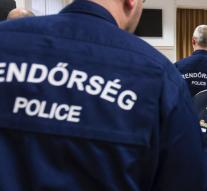 The action was directed against the Hungarian National Front (MNA). The leader of the far-right movement, Istvan Györkös, was arrested last month. Before he could be beaten at his home in shackles, he shot a cop.

Authorities say the arrests are linked to a bombing in Budapest in September, leaving two policemen were injured. The suspects were taken shortly before Györkös' arrest in custody.