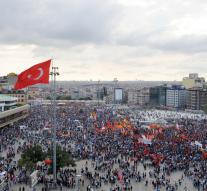 - A court in Turkey has 244 members sentenced to anti-government protests in Istanbul in 2013 to prison terms of between 2.5 and 14.5 months. Seven defendants were acquitted.

The protests in Taksim Square and Gezipark began in late May due to the planned redevelopment of the square and its surroundings and lasted for weeks. There were several deaths and hundreds of injuries and violence that the police cleared the park and the square shocked the world. The actions spread out into a more general protest against the government of Prime Minister Recep Tayyip Erdogan.

The convicts were given penalties for include violating ban on assembly, resistance to the police and damaging public property. Among the prisoners are two doctors who had treated injured protesters in a mosque.