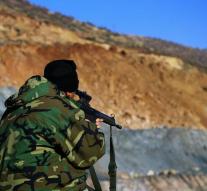 ankara - Turkey sent hundreds of extra troops to northern Syria. The Turkish armed forces there conduct an operation for Kurdish fighters and terrorist group Islamic State (IS) to ward off the border.

The fortifications consist of three hundred commandos, said a source within the military against state news agency Anadolu. It is unclear where the elite troops are deployed.

The Turkish forces withdrew late August in neighboring Syria. There they support insurgents including tanks and aircraft. According to the state news agency's terrorist group has since driven from an area of ​​about 1800 square kilometers in northern Syria.