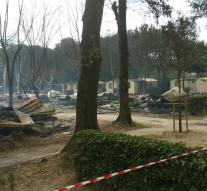 - In a sudden fire this morning in the Italian holiday Pra'delle Torri in Caorle, fifty kilometers northeast of Venice, almost forty bungalows are completely burned. The travelers, including Dutch, plummeting to flee to avoid being burned alive. They have cut and went up in flames. According to local press the fire started after four cylinders exploded. spread the fire rapidly from the strong winds. Under the Dutch who had to flee Rudy Span, who works in the resort.

The director of the holiday, Stefano Scrignoli, does not believe none of that gas cylinders were the cause of the disaster. "No, there was probably a candle toppled. There is nothing to worry about. There is no reason to panic. Our holiday center is 55 hectares and we have here at the moment 7,500 vacationers. These include 120 Dutch. It is not known to me whether they were in one of the bungalows. " Scrignoli find that there is a false alarm. "Everybody has been evacuated in time. We now look for new places where the affected guests can stay. "

The local fire department can find it all worse. "The bungalows are by the fire completely razed to the ground. There really is nothing left from over. The cause of the fire is not yet known, there is still going on. " Also confirms the police from Caorle that the cause of the fire is still unknown. "There are 37 bungalows completely burned and twelve other bungalows damaged. There are two hundred holidaymakers evacuated. There were no victims, but many vacationers Unfortunately, of course, lost all their possessions in the fire. "

Rick Bax's sales and marketing manager for Go4Camp, who owned 27 of the 37 burnt houses. "I have been working for five years now and this I have never seen," he says. "Such a bungalow costs about 15,000 to 20,000 euros. These accommodations are insured. We should now all rebooking and it's high season. So this is going to cost us do a few tons, I think, "said Rick Bax. In their 27 burned bungalows were 90 percent Danes. "For the rest, a German, a Swiss and an Italian. were no Dutch "in our bungalows.