Home / World / Hundreds of thousands on the streets against weapons 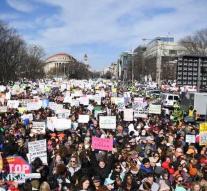 washington/parkland - Hundreds of thousands of young Americans are on the clock in the US to demonstrate against the barely controlled distribution of firearms in the country. The mass protests follow a shooting in a high school in Florida, where 14 February an ex-student with a semi-automatic weapon shot seventeen people.

The organization hopes that the protest march in Washington, the 'March for Our Lives' will certainly have half a million participants in the course of the day. It would thus become one of the biggest demonstrations in the capital since the seventies.

Thousands also argue in Parkland in Florida where the shooting was in February. There are also hundreds of demonstrations, including in Boston, Chicago, Houston and Los Angeles. In New York demonstrators gathered in front of the famous skyscraper of President Donald Trump, the Trump Tower. Trump is back home this weekend on the east coast of Florida, about 60 kilometers from Parkland.