Home / World / Hundreds of thousands of Chinese flee for rain 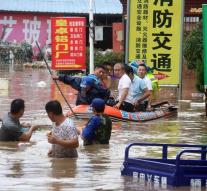 peking - Floods caused by heavy rains have driven hundreds of thousands of people out of their homes on Monday in the middle and south of China. At least 33 people died because of the heavy rainfall, fifteen people are missing.

According to the Chinese authorities, the water level in more than sixty rivers is at an alarming high level. The most affected is the southern province of Hunan. Flooded houses in the capital flooded trees and walked underwater.

In addition to Hunan, provinces like Hubei, Anhui, Sichuan and Guizhou also suffered from the abundant rainfall during the rainy season, which began last month. Crops are damaged, electricity has fallen out of some places. The northern part of China, including the capital of Beijing, has just hit a heat wave and drought.

In addition to China, neighboring Nepal is affected by the monsoon rainfall. Due to landslides and floods, at least nine people died.