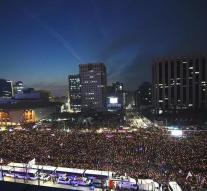 seoul - For the sixth time thousands of South Koreans have protested in six weeks against President Park Geun-hye. She is suspected of abuse of power and fraud, and is likely to be dropped.

According to the authorities arrived in the capital Seoul, hundreds of thousands of people gathered. The organizers of the protest spoke of more than one million demonstrators. The angry mob was stopped 100 meters from the presidential palace in the center of town by the police.

The parliament of South Korea voting Friday on an impeachment. Park would be the first president who is forced to give up her office. She has been president since February 2013.