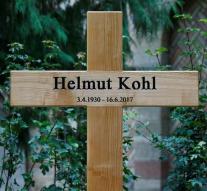 speyer - Almost one day after the funeral of Helmut Kohl, hundreds of people visited Sunday where the former German Chancellor died last week.

Sunday afternoon the cemetery in the German town of Speyer was released and the public could visit the grave. Some hundred people laid flowers at the grave and proved Kohl the last honor.

According to the municipality and the police in Speyer, Kohl's funeral expired without significant incidents. At the ceremony in and around the Cathedral of Speyer about 2500 invited guests and supervised some 1600 police and security personnel.