Home / World / Hundreds of marches against Geert Wilders in Pakistan 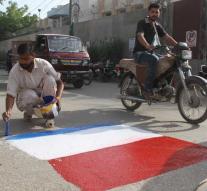 islamabad - Hundreds of Islamists are on a march on Wednesday to the Pakistani capital Islamabad in protest against Geert Wilders' cartoon contest in the Netherlands. That reported the British newspaper The Guardian. The demonstrators demand that the new government of Imran Khan break diplomatic relations with the Netherlands.

The activists call the cartoon contest blasphemous. The march is organized by the radical Islamic party Tehreek-e-Labbaik (TLP).

Wilders wants to hold the cartoon contest about the Prophet Muhammad later this year. He says he has received hundreds of entries.