Home / World / Hundreds of human bones were found in Mexico 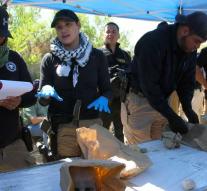 chihuahua - Nearly two hundred human bones have been found in northern Mexico. The authorities suspect that these are mass graves. The human remains were found in a number of places along a river in the state of Chihuahua, reports the attorney general in the area.

The sites are located in the municipality of Guadalupe, 40 kilometers south-east of Ciudad Juárez, close to the border with the United States.

Since 2009, human remains have been found in the Juárez valley more often, and the authorities suspect that there are also mass graves there. The area is considered a stronghold of organized crime, where in the past several drug cartels and security forces fought each other.