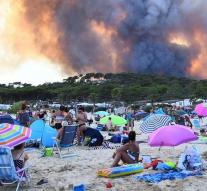 le lavandou/martigues - Hundreds of firefighters from all over France help their colleagues in the south to fight forest fires. French media reported Thursday that 450 firemen and soldiers were sent to the southeastern department of Var to help the fire department.

The big fire in Var at the town of Bormes-les-Mimosas did not expand on Thursday morning, but did not end. At the fire 80 kilometers east of Marseille, 1500 hectares of nature have gone up in flames. More than five hundred people fight the fire. Since Monday, forest fires in southeastern France and Corsica have laid about 7000 hectares in the ashes.

In the municipality of Martigues, west of Marseille, houses are also being threatened since Wednesday evening.