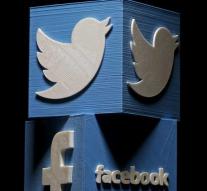 The companies received a tip from cyber security company FireEye. The accounts spread according to Twitter and Facebook untruths in the United States and the United Kingdom. Many Iranian propaganda was also placed on the pages.

The social media have published the news in the night from Tuesday to Wednesday. Facebook says to cooperate with the police in the investigation of the pages.

The manipulation and misinformation that was distributed was not specifically aimed at the US elections later this year, FireEye reports.