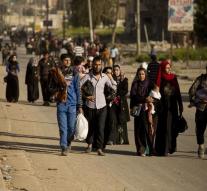 Hundreds of people fled from the Iraqi city of Mosul on Saturday. That happened after the Iraqi forces had recaptured two districts in the west of the city on the Islamic State terrorist group.

Flying families used cars to put babies, the elderly and their property in safety. People who reached a control station from government forces were transported by buses to shelters. There hundreds of thousands of people have come to a safe place since the battle started around the city.

Iraqi troops have now expelled IS from large parts of the city. The soldiers control the east of Mosul and wreck it in the west, where hundreds of thousands of civilians are still stuck. IS warriors in the northwest of the city have now surrounded and used boobytraps, snipers and mortar fire to keep the army away.