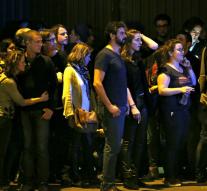 - In the Paris Bataclan theater, according to French media hundred deaths during the hostage of terrorists. This emerged after the storming of the theater by special police units.

It is not yet known how are the members of rock band Eagles of Death Metal. They performed Friday night at the theater.