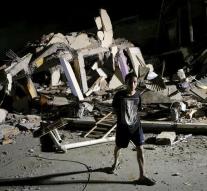 - The death toll from the earthquake that struck Ecuador Saturday, has risen to 272. The president of the South American country, Rafael Correa Delgado, has said this on the night of Sunday to Monday. It is feared that the death toll continues to rise. More than 2527 people were injured.

The quake with a magnitude of 7.8 was the worst in decades in the country and was followed by 163 aftershocks. The epicenter was off the coast, about twenty kilometers deep, but the quake was felt hundreds of kilometers away yet in the capital Quito.

President Rafael Correa Delgado has declared a state of emergency and has been previously returned from a visit to Vatican City.,, Everything can be rebuilt, but lost lives do not come back. That hurts the most, '' said Correa.

The Ecuadorian Red Cross has deployed more than 1,200 volunteers and staff personnel to provide assistance after the earthquake. Aid workers assisting in the search for survivors, provide medical assistance to the wounded man and ambulances.

,, This is a terrible day for the people of Ecuador. Our people are working around the clock to survivors detect this disaster, '' said Walter Cotte, America regional director of the International Red Cross.