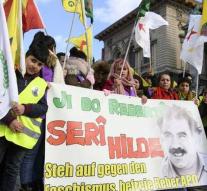 ankara - Last week in Turkey 474 people were arrested, because they have recommended the banned extremist Turkish Kurdish PKK or the main party of the Kurds in Syria, the PYD.

The Turkish Ministry of the Interior said Monday according to the newspaper Hürriyet that among the detainees there are 192 people who have also protested against the Turkish military operations in the Afrin region in northwestern Syria, not far from the Turkish border.

The goal of the Turkish military intervention at Afrin is the expulsion of YPG militias from the Syrian Kurds. The YPG (People's Protection Units) constitute the armed branch of the political movement PYD (Party of Democratic Union).

It was founded fifteen years ago in Syria. The leader of the PYD, Salih Muslim, has been put on a black list of wanted terrorists, reported Hürriyet Monday.