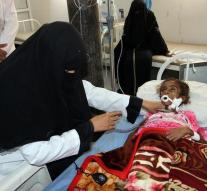 sanaa - A famine of 'biblical proportions' threatens in Yemen. For this reason, the head of the Norwegian Refugee Council warned during a visit to the conflict-torn country. Jan Egeland denied the inability of 'men with weapons and power' to put an end to the battle.

Yemen's economy has been collapsed by the struggle between Houthi insurgents and an international coalition led by Saudi Arabia. The United Nations estimates that over the past few years more than ten thousand people have come to life, even though the actual number may be a lot higher.

Egeland said by telephone from the capital Sanaa that a humanitarian disaster threatens. 'We have reached some 3.1 million people through the World Food Program, while 7 million people are suffering from hunger. That means, in fact, that four million in April did not get anything, 'said the experienced counselor and UN advisor.

According to Egeland, the crisis in Yemen receives insufficient attention because few journalists and diplomats are earning the country. He warned that half a million children are already on the verge of death. Many young people would already die 'in silence' in homes.