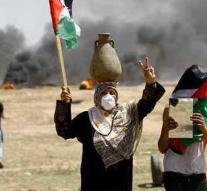 geneva - An independent committee should investigate the Israeli army's violence against Palestinian demonstrators at the border between Gaza and Israel. The Human Rights Council of the UN has decided to do so. The committee is commissioned to find out whether humanitarian peoples law has been violated.

The violence around the border has become increasingly intense in recent weeks. The army killed about sixty Palestinian demonstrators on Monday.

UN High Commissioner for Human Rights Zeid Ra'ad al-Hussein said Friday that the violence was 'out of all proportion'. Israel reacted very indignantly to the decision of the council. According to Jerusalem, 'hypocrisy and absurdity prevail' within the body and the majority of the members are by definition anti-Israel.