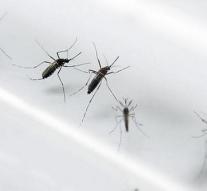 - In Brazil, the number of infections increased dramatically with the chikungunya virus. In the country this year registered more than 251,000 cases of illness. This was announced by the Brazilian Ministry of Health Thursday.

The number of cases of infection caused by stabbing the tiger mosquito, has increased almost tenfold. In 2015 they were still 26 435 cases. The deaths increased from 6 to 138. Next year is expected to increase.

This chikungunya is more widespread in Brazil than zika, which is also spread by the tiger mosquito. The World Health Organization lifted the state of emergency last week for the zikavirus because it is no longer an international health threat.

Chikungunya is a serious viral disease with severe rash, high fever and severe pain in the joints, allowing patients to be crippled for months. Chikungunya was originally only in Africa. Since 2014 the virus in Brazil raises its head.