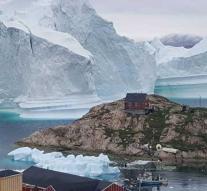 copenhagen - A huge iceberg has been driven to a small coastal village in Greenland. The authorities fear that a tsunami could hit the town of Innaarsuit if the collapse collapses.

On images you can see that the iceberg towers above the village. The colossus did not move the previous night, message broadcaster KNR. The authorities have evacuated a danger zone close to the coast, says a spokesman for the police.

Last year, four people died when waves overwhelmed a remote coastal village in Greenland. That happened when debris ended up in the sea by a landslide.