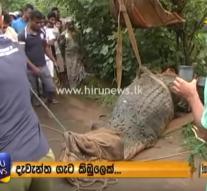 - Matara in Sri Lanka rangers have a huge crocodile rescued from a canal. According to local media got stuck the reptile Monday in the canal when he was looking for food and the water level began to rise due to heavy rainfall.

Reports indicate that the reptile weighing nearly 1 ton and more than 5 meters long. According to experts, this kind of crocodiles can not be much larger. ' Because of his size, he could not get lost themselves. Fortunately, we have made together with citizens and the police to hit the crocodile got away without injury, 'said a spokesman for the Rangers.