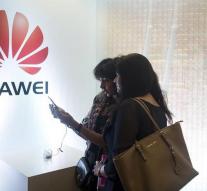 - China's Huawei Thursday two new smartphones and a tablet presented at the fair IFA in Berlin. The smartphones are the Nova and Nova Plus, designed for the mid-market. The tablet is the MediaPad M3.

Nova has a 5-inch screen, the display of the Nova Plus is one centimeter higher. Both screens have 1080 pixels. The devices have include a fingerprint scanner. Earlier this year, Huawei already presented the P9 and Mate 8. Huawei is the third smartphone maker in the world, behind Samsung and Apple.

The MediaPad M3 is intended primarily for movies and music, with a 8.4 inch screen and sharp audio. It runs on Android Marshmallow.


Sony has presented a smartwatch at IFA, the FES Watch U. He has an 'always on display. In other words, the time is shown continuously, the watch is not on standby. Samsung Gear S3, presented Wednesday, has that too.

Sony showed at IFA a new phone, the Xperia XZ. He has a 23 megapixel camera with autofocus, which focuses automatically.