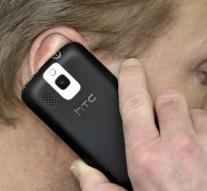 taipei - HTC works on a smartphone that is operated by squeezing in the side. That smartphone, the HTC U, must be presented on May 16th. HTC has sent the invitations to the presentation, with the slogan: '' Bring for the brilliant U ''.

Rumors about the smartphone have been around for a long time. The device, which had the codenam Ocean, would have sensors on the side of the housing. By pressing there, the phone could be operated.

According to The Verge, the smartphone receives a 5. 5 inch screen, with a 16 megapixel camera and a 12 megapixel camera. Under the hood is a Qualcomm Snapdragon 835 processor. The device would run on Android Nougat 7. 1.

The new smartphone is of great importance to HTC. The Taiwanese do not succeed in breaking through the power of Samsung and Apple. The Chinese competitors Huawei, OPPO and Vivo are also larger. Also the last two devices, the 10 and the U Ultra, did not bring the success that HTC had hoped for.