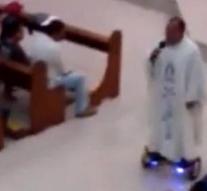 - The Catholic Church does not seem ready for the future. It has a priest in the Philippines suspended during Mass on Christmas Eve sermon already loved riding a hoverboard.


A visitor to the Mass made a video of the hoverboard priest and placed it on social media where it quickly went viral.
Conservative members of the Church and the Diocese of San Pablo, however, could not appreciate the stunt. In a statement the diocese says the priest is now also realizes that his action was not correct. He has promised that it will not happen again. He will temporarily not be present in the parish to reflect on his action.

This calls for a reparation! Instead, pray a rosary for this priest and attend a Traditional Latin Mass! Posted by
NOVUS ORDO Insider on Saturday, December 26th, 2015