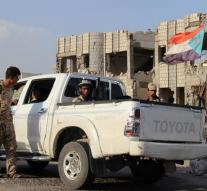 riyad - The Houthi rebels in Yemen fired a ballistic missile in the direction of the Saudi capital Riyadh on Friday night. The Arab coalition fighting in Yemen against the Houthi states that it intercepted and destroyed the projectile about 200 kilometers west of the city. The incident took place on the eve of the visit of the American president to the city.

According to the official press office of Iran-supported Houthi rebels, it is a Burkan-1 rocket. The projectile was aimed at Riyadh, according to the statement in which no further details were given.

The Saudi-led coalition reported later that it had dropped the rocket in the southern Saudi province of Ar-Rayn. There were no victims, according to the official Saudi press office SPA.

Riyadh is Trump's first stop on his first foreign trip on Saturday. He is expected to conclude important security and trade agreements with the Saudi people.