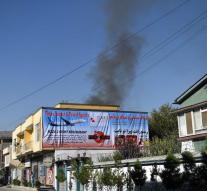 kabul - Afghan security forces have also the last bomber shot dead in the wealthy neighborhood Share Naw after an hour-long gun battle in Kabul. The center of the Afghan capital was sealed off all the time, but is now accessible again. At least one death and six injuries.

The three attackers were ensconced in the offices of aid organization Care International. One of their companions had previously blown up in the district, which has many offices and expensive homes. Responsibility for the attack has not been claimed.

Kabul has long been relatively safe, but lately that has changed. Earlier Monday blew two Taliban fighters are already in the Ministry of Defence. They pulled at least 24 people with death, including a general, two senior police officers and the second man of the bodyguard of the president.