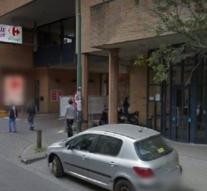 brussels - The 25-year-old man Tuesday night in a supermarket in the Brussels borough Forest hostage thirty people had earlier that day been to the police and asked if he could go back to prison. Reported that the Brussels public prosecutor.

Nourredine Ouartassi, the son of the local Councillor for Sports and school activities Ahmed Ouartassi was on parole after a previous conviction. Until the moment of the kidnapping, there was no reason to hold him, said the prosecutor.

Frost was rocked Tuesday by a runaway robbery. Ouartassi was armed with a pistol and put a cashier fixed with handcuffs. During telephone negotiations he occasionally go a hostage, after which he quickly surrendered. No one was injured.

Ahmed Ouartassi responded Tuesday to reports the deed of his son. He expressed deep dismay over the actions of one of his four children, who suffered for years according to him, 'psyische problems. '