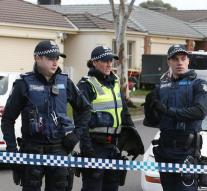 melbourne - The Australian police are investigating whether there is a terrorist side to a fatal hostage in Melbourne. A man armed with a gun with a long criminal record shot a man in the hall of an apartment building and hosted a woman. Agents shot him dead when he was shooting out. Three agents were injured, the hostage remained unharmed.

Terrorist group Islamic State claimed responsibility. In a statement that came remarkably fast and, moreover, in translation, IS announced that the action was the work of a 29-year-old Australian of Somali origin. The reason was that Australia is part of the coalition fighting against IS in Syria and Iraq.

The hostage host, Yacqub Khayre, sat in his probationary period after a conviction for housewife break. He was also tried but absent from preparing an attack on a military base in Sydney eight years ago.