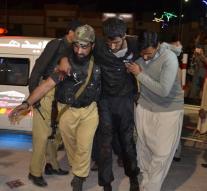 quetta - In the attack, according to authorities and doctors over fifty people slain at a police training center in the Pakistani city of Quetta. That number may rise, let the Ministry of Internal Affairs of the Baluchistan province know the night of Monday to Tuesday. Also, there is more than one hundred casualties.

According to the Ministry stormed five or six armed men Monday night the grounds of the police school, where several hundred cadets in training and took part of them hostage in the main building. Security forces of the army and members of the paramilitary Frontier Corps subsequently surrounded the area and started rescue operation. After more than five hours, the troops put an end to the hostage, so the ministry announced.

According to the television channel Geo TV are also three of the perpetrators slain. The stop is not yet claimed. Military commanders in the province of Baluchistan said they have evidence that the extremists Lashkar-e-Jhangvi behind the attack.

In 2006 and 2008, the complex also sometimes targeted. Then came missiles down on the ground.