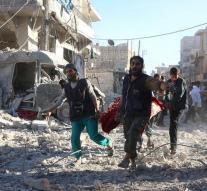 aleppo - In airstrikes in the northeast of the city of Aleppo, where fierce battle raging between rebels and government forces Saturday bombed a hospital. The hospital was hit by two so-called barrel bombs. This was reported by the medical staff of the hospital.

Barrel bombs are containers with explosives and shrapnel which are often thrown out of helicopters. They are used by the Syrian army.

According to the Syrian Observatory for Human Rights is a citizen to come to life and several people were injured. The hospital has fallen out of use.